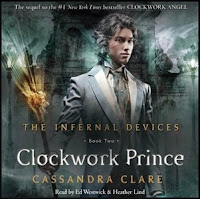 The search for the Magister is becoming more desperate as Bendick Lightwood seeks to take the Institute from Charlotte. The Branwells are given two weeks to find the Magister. Meanwhile, Will finds that he cannot get over his love for Tessa and Tessa finds her feelings for Jem are growing even as she can't help loving Will.

I couldn't remember the first book, Clockwork Angel, so when I looked at my review for it I wasn't surprised to find I hadn't been impressed. But still I didn't hate it, just felt neutral on it so I decided to go ahead and continue on with the series. I liked this one. It was really good and I think the narration helped with that. So maybe this is one of those series that works better for me on audio than reading it. It's happened before.

In this one we find out Will's secret, the reason he pushes Tessa Gray (and everyone one else) away. It's a valid reason but I must say the resolution of it was a bit of a disappointment and it came about really easily. I guess having a warlock for a "friend" comes in handy. A large portion of this book is devoted to the love triangle between Will, Tess, and Jem. I think Jem is pretty unaware that he is involved in a love triangle. It gets a little too angsty for my taste though it does have some pretty awesome kissing scenes.

The other plot is trying to find Mortmain and dealing with his minions. Less time is devoted to this. Consequently I don't feel like Mortmain is much of a threat. Probably because I already have assumed the ending. The love story is the real driving force in this series.

Ed Westwick (Chuck Bass from Gossip Girl) and Heather Lind narrated this story. Lind does the majority of the narration with Westwick always reading the quotations and the beginning of the chapters. I'm not sure where the division came in. I guess Lind read most of the Tess parts and, if the story focused more on Will, Westwick read that bit. It worked out. I enjoyed both their readings. Lind seems to have a better time with voices although Westwick's American voice is really good (it would have to be after all the time on Gossip Girl) he doesn't do girl voices quite right. So it was a nice mixture if a little odd.