I posted reviews of Send Me a Sign by Tiffany Schmidt, Because It is My Blood by Gabrielle Zevin, and  Enchanted by Alethea Kontis, read by Katherine Kellgren.

2 girls + 3 guys + 1 house - parents = 10 things April and her friends did that they (definitely, maybe, probably) shouldn't have.
If given the opportunity, what sixteen-year-old wouldn't jump at the chance to move in with a friend and live parent-free? Although maybe "opportunity" isn't the right word, since April had to tell her dad a tiny little untruth to make it happen (see #1: "Lied to Our Parents"). But she and her housemate Vi are totally responsible and able to take care of themselves. How they ended up "Skipping School" (#3), "Throwing a Crazy Party" (#8), "Buying a Hot Tub" (#4), and, um, "Harboring a Fugitive" (#7) at all is kind of a mystery to them.
In this hilarious and bittersweet tale, Sarah Mlynowski mines the heart and mind of a girl on her own for the first time. To get through the year, April will have to juggle a love triangle, learn to do her own laundry, and accept that her carefully constructed world just might be falling apart . . . one thing-she-shouldn't-have-done at a time.

Summers span decades. Winter can last a lifetime. And the struggle for the Iron Throne has begun.

As Warden of the north, Lord Eddard Stark counts it a curse when King Robert bestows on him the office of the Hand. His honour weighs him down at court where a true man does what he will, not what he must … and a dead enemy is a thing of beauty.

The old gods have no power in the south, Stark’s family is split and there is treachery at court. Worse, the vengeance-mad heir of the deposed Dragon King has grown to maturity in exile in the Free Cities. He claims the Iron Throne.

Reese can’t remember anything from the time between the accident and the day she woke up almost a month later. She only knows one thing: She’s different now.

Across North America, flocks of birds hurl themselves into airplanes, causing at least a dozen to crash. Thousands of people die. Fearing terrorism, the United States government grounds all flights, and millions of travelers are stranded.

Reese and her debate team partner and longtime crush David are in Arizona when it happens. Everyone knows the world will never be the same. On their drive home to San Francisco, along a stretch of empty highway at night in the middle of Nevada, a bird flies into their headlights. The car flips over. When they wake up in a military hospital, the doctor won’t tell them what happened, where they are—or how they’ve been miraculously healed.

Things become even stranger when Reese returns home. San Francisco feels like a different place with police enforcing curfew, hazmat teams collecting dead birds, and a strange presence that seems to be following her. When Reese unexpectedly collides with the beautiful Amber Gray, her search for the truth is forced in an entirely new direction—and threatens to expose a vast global conspiracy that the government has worked for decades to keep secret. 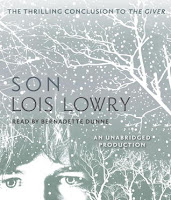 When the young girl washed up on their shore, no one knew she had been a Vessel. That she had carried a Product. That it had been carved from her belly. Stolen.
Claire had had a son. She was supposed to forget him, but that was impossible. When he was taken from their community, she knew she had to follow. And so her journey began.
But here in this wind-battered village Claire is welcomed as one of their own. In the security of her new home, she is free and loved. She grows stronger. As tempted as she is by the warmth of more human kindness than she has ever known, she cannot stay. Her son is out there; a young boy by now. Claire will stop at nothing to find her child . . . even if it means trading her own life.
With Son, the two-time Newbery Medal–winning Lois Lowry has spun another mesmerizing tale in this thrilling and long-awaited conclusion to The Giver.


The Rising by Will Hill (Department Nineteen #2)

James Bond meets Dracula in this epic saga of one boy and a ton of weapons versus the world's oldest evil--vampires as you've never seen them before!

Sixteen-year-old Jamie Carpenter's life was violently upended when he was brought into Department 19, a classified government agency of vampire hunters that was formed to deal with a little problem . . . known as Dracula.

But being the new recruit at the Department isn't all weapons training and covert missions. Jamie's own mother has been turned into a vampire--and now Jamie will stop at nothing to wreak revenge on her captors. Even if that means facing down Dracula himself.

In this breathtaking debut that reads like Gossip Girl crossed with Twin Peaks, a Queen Bee at a blue-blooded New England prep school stumbles into a murder mystery.

Anne Dowling practically runs her exclusive academy on New York’s Upper East Side—that is, until she accidentally burns part of it down and gets sent to a prestigious boarding school outside of Boston. Determined to make it back to New York, Anne could care less about making friends at the preppy Wheatley School. That is, until her roommate Isabella’s body is found in the woods behind the school.

When everyone else is oddly silent, Anne becomes determined to uncover the truth no matter how many rules she has to break to do it. With the help of Isabella’s twin brother Anthony, and a cute classmate named Brent, Anne discovers that Isabella wasn’t quite the innocent nerdy girl she pretended to be. But someone will do anything to stop Anne’s snooping in this fast-paced, unputdownable read—even if it means framing her for Isabella’s murder.

Once a GEN (genetically engineered nonhuman) girl terrified of her first Assignment, Kayla is now a member of the Kinship, a secret organization of GENs, lowborns, and trueborns. Kayla travels on Kinship business, collecting information to further the cause of GEN freedom.

Despite Kayla’s relative freedom, she is still a slave to the trueborn ruling class. She rarely sees trueborn Devak, and any relationship between them is still strictly forbidden.

Kayla longs to be truly free, but other priorities have gotten in the way. A paradoxically deadly new virus has swept through GEN sectors—a disease only GENs catch. And GEN warrens and warehouses are being bombed, with only a scrawled clue: F.H.E. Freedom, Humanity, Equality.

With the virus and the bombings decimating the GEN community, freedom and love are put on the back burner as Kayla and her friends find a way to stop the killing . . . before it’s too late.

I live in a world without magic or miracles. A place where there are no clairvoyants or shapeshifters, no angels or superhuman boys to save you. A place where people die and music disintegrates and things suck. I am pressed so hard against the earth by the weight of reality that some days I wonder how I am still able to lift my feet to walk.

Former piano prodigy Nastya Kashnikov wants two things: to get through high school without anyone learning about her past and to make the boy who took everything from her—her identity, her spirit, her will to live—pay.

Josh Bennett’s story is no secret: every person he loves has been taken from his life until, at seventeen years old, there is no one left. Now all he wants is be left alone and people allow it because when your name is synonymous with death, everyone tends to give you your space.

Everyone except Nastya, the mysterious new girl at school who starts showing up and won’t go away until she’s insinuated herself into every aspect of his life. But the more he gets to know her, the more of an enigma she becomes. As their relationship intensifies and the unanswered questions begin to pile up, he starts to wonder if he will ever learn the secrets she’s been hiding—or if he even wants to.

The Sea of Tranquility is a rich, intense, and brilliantly imagined story about a lonely boy, an emotionally fragile girl, and the miracle of second chances.

Rose Zarelli has big plans for sophomore year—everything is going to be different. This year, she’s going to be the talented singer with the killer voice, the fabulous girl with the fashionista best friend, the brainiac who refuses to let Jamie Forta jerk her around...

...but if she’s not careful, she’s also going to be the sister who misses the signals, the daughter who can only think about her own pain, the “good girl” who finds herself in mid-scandal again (because no good deed goes unpunished) and possibly worst of all...the almost-girlfriend.

When all else fails, stop looking for love and go find yourself.

Email ThisBlogThis!Share to TwitterShare to FacebookShare to Pinterest
Labels: From the Library, in the email, weekly round-up