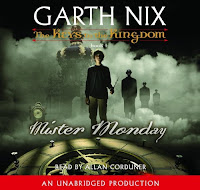 Arthur is an ordinary boy until he is chosen to become the Rightful Heir to the House, a place from which all other realms originated.   Armed only with the Lesser Key of the Lower House, Arthur must defeat Mister Monday, the Trustee who holds the power over the Lower House in order to go back to his own home and saved his world from a mysterious plague.

On the first day, Arthur should have died.

"Clearly the Old One had the capacity to kill -- or easily deliver some sort of final ending that sounded remarkably like death."

Now I've already read what's out of the Keys to the Kingdom, but I wanted to go back and do a re-read for Lord Sunday which comes out next year (March?).  And what better way than to do an audio listen.  Allan Corduner is the narrator and he does a fantastic job.  He is also the narrator of The Book Thief which he does a great job reading as well.

I really like Arthur.  He is a smart and sensible 12 year old boy.  He has one goal in mind: to save his town from the "Sleepy Plague" and finds that in order to do that he has to defeat Mister Monday which sets forth a chain reaction throughout the House and with the other Morrow Days.  So one action leads to many other adventures.  And I also like Susie Turquoise Blue.  She is so scrappy and funny and a good companion for Arthur.

So I'm not sure if I found any extra added details or anything but I certainly notice hints of what is to come, especially with the Will.  There are a lot of unanswered questions at the end and it sets up the series quite nicely.  There is also the beginning of the mythology of the series which is my favorite part.  The House was created by the Architect as the epicenter of the universe.  The Architect goes away and leaves parts of the House in the charge of the Trustees (collectively referred to as the Morrow Days). The Trustees were suppose to find a mortal to become the Rightful Heir of the Architect, but instead split the Will of the Architect into seven pieces and hid them throughout the House and the Secondary Realms and kept the Keys of power for themselves.  Because of this the House has fallen into disrepair until Part One of the Will escapes and makes Arthur the Rightful Heir.   And that is just the beginning.  There is much more and all kinds of literary references that make the series so fun.
Posted by Andrea