Of Triton by Anna Banks (The Syrena Legacy #2) (audio) 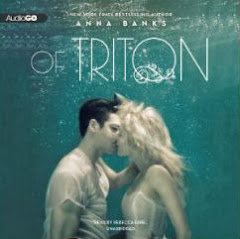 In this sequel to Of Poseidon, Emma has just learned that her mother is a long-lost Poseidon princess, and now struggles with an identity crisis: As a Half-Breed, she’s a freak in the human world and an abomination in the Syrena realm below. Syrena law states that all Half- Breeds should be put to death.

As if that’s not bad enough, her mother’s reappearance among the Syrena turns the two kingdoms—Poseidon and Triton—against one another. Which leaves Emma with a decision to make: Should she comply with Galen’s request to keep herself safe and just hope for the best? Or should she risk it all and reveal herself—and her Gift—to save a people she’s never known

So here is the second half of  Of Poseidon and it clears up what will happen to Emma if she is ever found out and about her mother, the lost princess of Poseidon. Galen is such an alpha male and he borders much more on controlling in this book than he did in the first or maybe I don't remember. And Emma comes out much more child-like because of this. Her mother is still not a presence despite being in the book more. I wish there would have been more of that relationship or any other relationship. Galen and Emma spend most of the book apart though they do manage a few nice kissing scenes. Still I wanted them more together. I guess that's why there is going to be a third book. It's not entirely necessary. The plot points were pretty wrapped up at the end of this book so I guess the third one is just for kicks. Ah well, it is a cute series and the characters are genuinely enjoyable. Hopefully Galen and Emma can get time together now that the Syrena issues are settled.

Rebecca Gibel narrates this one as she did the first one. I enjoy her reading and I like the voices she does for each. She is best in Emma's chapters but I would listen to her again.
Posted by Andrea