This week I'm reading by The Cuckoo's Calling by Robert Galbraith and The Honest Toddler: A Child's Guide to Parenting by Bunmi Laaditan and listening to The Girl Who Fell Beneath Fairyland and Led the Revels There by Catherynne M. Valente, read by S.J. Tucker.

This week on SYNC you can download Grave Mercy by Robin LaFevers, read by Erin Moon and Hamlet by William Shakespeare, read by a Full Cast (L.A. Theatre Works). Downloads are free til Wednesday. Thursday the new downloads are The False Prince by Jennifer A. Nielsen, read by Charlie McWade (Scholastic Audiobooks) and The Prince and the Pauper by Mark Twain, read by Steve West.

By now everyone who knows who Robert Galbraith is a pseudonym for (J.K. Rowling). So yeah I jumped on the bandwagon. I struggled with her literary book The Casual Vacancy and never finished it but that is not really my genre. I love mysteries so I'm hoping that I like this.
The Cuckoo's Calling by Robert Galbraith

After losing his leg to a land mine in Afghanistan, Cormoran Strike is barely scraping by as a private investigator. Strike is down to one client, and creditors are calling. He has also just broken up with his longtime girlfriend and is living in his office.

Then John Bristow walks through his door with an amazing story: His sister, thelegendary supermodel Lula Landry, known to her friends as the Cuckoo, famously fell to her death a few months earlier. The police ruled it a suicide, but John refuses to believe that. The case plunges Strike into the world of multimillionaire beauties, rock-star boyfriends, and desperate designers, and it introduces him to every variety of pleasure, enticement, seduction, and delusion known to man. 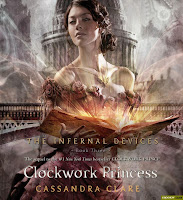 A net of shadows begins to tighten around the Shadowhunters of the London Institute. Mortmain plans to use his Infernal Devices, an army of pitiless automatons, to destroy the Shadowhunters. He needs only one last item to complete his plan: he needs Tessa Gray.

Charlotte Branwell, head of the London Institute, is desperate to find Mortmain before he strikes. But when Mortmain abducts Tessa, the boys who lay equal claim to her heart, Jem and Will, will do anything to save her. For though Tessa and Jem are now engaged, Will is as much in love with her as ever.

As those who love Tessa rally to rescue her from Mortmain’s clutches, Tessa realizes that the only person who can save her is herself. But can a single girl, even one who can command the power of angels, face down an entire army?

Danger and betrayal, secrets and enchantment, and the tangled threads of love and loss intertwine as the Shadowhunters are pushed to the very brink of destruction in the breathtaking conclusion to the Infernal Devices trilogy. 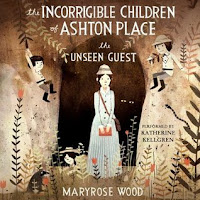 Of especially naughty children it is sometimes said, "They must have been raised by wolves."

The Incorrigible children actually were.

Since returning from London, the three Incorrigible children and their plucky governess, Miss Penelope Lumley, have been exceedingly busy. Despite their wolfish upbringing, the children have taken up bird-watching, with no unfortunate consequences—yet. And a perplexing gift raises hard questions about how Penelope came to be left at the Swanburne Academy for Poor Bright Females and why her parents never bothered to return for her.

But hers is not the only family mystery to solve. When Lord Fredrick's long-absent mother arrives with the noted explorer Admiral Faucet, gruesome secrets tumble out of the Ashton family tree. And when the admiral's prized racing ostrich gets loose in the forest, it will take all the Incorrigibles' skills to find her.

The hunt for the runaway ostrich is on. But Penelope is worried. Once back in the wild, will the children forget about books and poetry and go back to their howling, wolfish ways? What if they never want to come back to Ashton Place at all?