This week I'm reading by Epic Fail by Claire LaZebnik  and The Honest Toddler: A Child's Guide to Parenting by Bunmi Laaditan and listening to The Girl Who Fell Beneath Fairyland and Led the Revels There by Catherynne M. Valente, read by S.J. Tucker.

Last week I reviewed The Truth About Forever by Sarah Dessen and The Girl who Circumnavigated Fairyland in a Ship of Her Own Making by Catherynne M. Valente, read by the author.

This week on SYNC you can download The Peculiar by Stefan Bachmann, read by Peter Altschuler and Oliver Twist by Charles Dickens, read by Simon Vance. Downloads are free til Wednesday. Thursday the new downloads are Grave Mercy by Robin LaFevers, read by Erin Moon and Hamlet by William Shakespeare, read by a Full Cast (L.A. Theatre Works).

Crazy Rich Asians is the outrageously funny debut novel about three super-rich, pedigreed Chinese families and the gossip, backbiting, and scheming that occurs when the heir to one of the most massive fortunes in Asia brings home his ABC (American-born Chinese) girlfriend to the wedding of the season. When Rachel Chu agrees to spend the summer in Singapore with her boyfriend, Nicholas Young, she envisions a humble family home, long drives to explore the island, and quality time with the man she might one day marry. What she doesn't know is that Nick's family home happens to look like a palace, that she'll ride in more private planes than cars, and that with one of Asia's most eligible bachelors on her arm, Rachel might as well have a target on her back. Initiated into a world of dynastic splendor beyond imagination, Rachel meets Astrid, the It Girl of Singapore society; Eddie, whose family practically lives in the pages of the Hong Kong socialite magazines; and Eleanor, Nick's formidable mother, a woman who has very strong feelings about who her son should--and should not--marry. Uproarious, addictive, and filled with jaw-dropping opulence, Crazy Rich Asians is an insider's look at the Asian JetSet; a perfect depiction of the clash between old money and new money; between Overseas Chinese and Mainland Chinese; and a fabulous novel about what it means to be young, in love, and gloriously, crazily rich.

Zach, Poppy and Alice have been friends for ever. They love playing with their action figure toys, imagining a magical world of adventure and heroism. But disaster strikes when, without warning, Zach’s father throws out all his toys, declaring he’s too old for them. Zach is furious, confused and embarrassed, deciding that the only way to cope is to stop playing . . . and stop being friends with Poppy and Alice. But one night the girls pay Zach a visit, and tell him about a series of mysterious occurrences. Poppy swears that she is now being haunted by a china doll – who claims that it is made from the ground-up bones of a murdered girl. They must return the doll to where the girl lived, and bury it. Otherwise the three children will be cursed for eternity.


The Girl Who Fell Beneath Fairyland and Led the Revels There by Catherynne M. Valente, read by S.J. Tucker 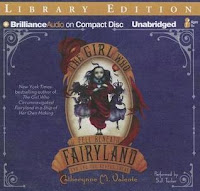 September has longed to return to Fairyland after her first adventure there. And when she finally does, she learns that its inhabitants have been losing their shadows—and their magic—to the world of Fairyland Below. This underworld has a new ruler: Halloween, the Hollow Queen, who is September’s shadow. And Halloween does not want to give Fairyland’s shadows back.