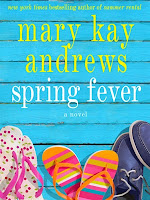 Annajane is anxious to get out of Pascoe, NJ and move on with her life. But first she wants to see her ex-husband, Mason, get married to achieve some closure. An unfortunate emergency involving Mason's daughter stops the wedding literally as the bride is walking down the isle. From there things spiral out of Annajane's control until she is wondering if maybe the reason she can't leave Mason and Pascoe behind is because she doesn't want to.

I think this is my third Mary Kay Andrews and as usual it was charming though I liked it less than Hissy Fit and The Fixer Upper. I think it was because Mason and Annajane divorced for a stupid reason and I have no patience for that. Plus the beginning of this book was pretty much all back story and flashback and it felt clumsy. But once that was out of the way and the plot moved on, it was golden. I enjoyed both Annajane and Mason's characters and I thought Pokey, Mason's sister/Annajane's BFF, was hilarious. Mason's daughter, Sophie, was sweet though she read a little younger than 5 to me. I will say that the "villains" of the story were pretty much nothing but caricatures of villains especially Celia, Mason's bride-to-be. She was such a stereotype that when she plays the pregnancy card I just rolled my eyes. Because of course she does. I don't feel like the nitty-gritty of what drove Celia was every really explored. But I guess we aren't suppose to care, just actively root against her.

The book ends up just where you'd expect but that's okay. It is a fun and flirty book, a great summer read that I enjoyed.

Kathleen Mcinerney is the narrator and I enjoyed listening to her. She had just the right kind of voice though she managed to make a few characters more Southern sounding than others despite the fact that they all grew up in the same town.