The Secret Diary of Alice in Wonderland, Age 46 and Three-Quarters (e-book) by Barbara Silkstone 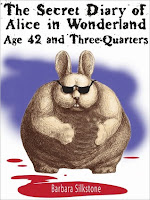 A murder by beheading sends Alice Harte, reluctant real estate broker for thugs, running into the arms of Nigel Channing, a charming British con man. This urban fantasy is set in Miami and London. Fans of Stephanie Plum will cheer for Alice as she watches her back in attempting to keep her head, while being stalked by Nigel's daft ex-wife and inept, but dangerous mobsters. Alice's world is filled with memorable characters strangely reminiscent of Alice in Wonderland.

Nigel, a chubby John Cleese with serious dress-code problems, whisks Alice to England. She sees him as her White Rabbit rescuer. The plot trips along at a cracking pace with Alice flinging zingers like a drive-by shooter.

After Alice discovers a gangster's freshly beheaded body in his Miami mansion, she launches a desperate self-defense in a kangaroo court. The main witness against her is Algy Green, a bumbling cockney swindler who super glues his bat wing ears to his head and commits perjury for theme park tickets. But in the middle of the trial a small piece of evidence opens her eyes.

From Simon and Schuster

Pearl is a sixteen-year-old vampire... fond of blood, allergic to sunlight, and mostly evil... until the night a sparkly unicorn stabs her through the heart with his horn. Oops.

Her family thinks she was attacked by a vampire hunter (because, obviously, unicorns don't exist), and they're shocked she survived. They're even more shocked when Pearl discovers she can now withstand the sun. But they quickly find a way to make use of her new talent. The Vampire King of New England has chosen Pearl's family to host his feast. If Pearl enrolls in high school, she can make lots of human friends and lure them to the King's feast -- as the entrees.

The only problem? Pearl's starting to feel the twinges of a conscience. How can she serve up her new friends—especially the cute guy who makes her fangs ache—to be slaughtered? Then again, she's definitely dead if she lets down her family. What's a sunlight-loving vamp to do?


Goliath by Scott Westerfeld (I will be buying this one, but I couldn't resist an ARC.  But these books are really best view in real life since they are so beautiful.)
Publish date:  9/20/11

Alek and Deryn are on the last leg of their round-the-world quest to end World War I, reclaim Alek’s throne as prince of Austria, and finally fall in love. The first two objectives are complicated by the fact that their ship, the Leviathan, continues to detour farther away from the heart of the war (and crown). And the love thing would be a lot easier if Alek knew Deryn was a girl. (She has to pose as a boy in order to serve in the British Air Service.) And if they weren’t technically enemies.

The tension thickens as the Leviathan steams toward New York City with a homicidal lunatic on board: secrets suddenly unravel, characters reappear, and nothing is at it seems in this thunderous conclusion to Scott Westerfeld’s brilliant trilogy.

Email ThisBlogThis!Share to TwitterShare to FacebookShare to Pinterest
Labels: books I bought, in the email, weekly round-up