This week I am reading Sister Mischief (Goode) and The Wizard of Dark Street (Odyssey) and listening to My Bonny Light Horseman (Meyer) and Paranormalcy (White).

Last week I read Never Sit Down in a Hoopskirt and Other Things I Learned in Southern Belle Hell (Rumley) and finished listening to The Disreputable History of Frankie Landau-Banks (Lockhart) and Glee: The Beginning (Lowell).
Other reviews posted: Imaginary Girls (Suma)

For Books in the Email check out this post

My Bonny Light Horseman: Being an Account of the Further Adventures of Jacky Faber, in Love and War (audio) by L.A. Meyer, read by Katharine Kellgren 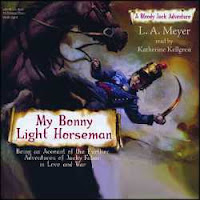 In My Bonny Light Horseman, the infamous pirate, riverboat seductress, master of disguise, and street-urchin-turned-sailor Jacky Faber has been captured by the French and beheaded in full view of her friends and crew.

The truth is she’s secretly forced to pose as an American dancer behind enemy lines in Paris, where she entices a French general into revealing military secrets—all to save her dear friends. Then, in intrepid Jacky Faber style, she dons male clothing and worms her way into a post as a galloper with the French army, ultimately leading a team of men to fight alongside the great Napoleon.

In this sixth installment of the Bloody Jack series, love and war collide as the irrepressible Jacky Faber sets off on a daring adventure she vowed she’d never take!

Katarina Bishop has worn a lot of labels in her short life: Friend. Niece. Daughter. Thief. But for the last two months she’s simply been known as the girl who ran the crew that robbed the greatest museum in the world. That’s why Kat isn’t surprised when she’s asked to steal the infamous Cleopatra Emerald so it can be returned to its rightful owners.
There are only three problems. First, the gem hasn’t been seen in public in thirty years. Second, since the fall of the Egyptian empire and the suicide of Cleopatra, no one who holds the emerald keeps it for long — and in Kat’s world, history almost always repeats itself. But it’s the third problem that makes Kat’s crew the most nervous, and that is . . . the emerald is cursed.
Kat might be in way over her head, but she’s not going down without a fight. After all, she has her best friend — the gorgeous Hale — and the rest of her crew with her as they chase the Cleopatra around the globe, dodging curses and realizing that the same tricks and cons her family has used for centuries are useless this time.
Which means, this time, Katarina Bishop is making up her own rules.