Mississippi Jack : Being an Account of the Further Waterborne Adventures of Jacky Faber, Midshipman, Fine Lady, and the Lily of the West by L.A. Meyer 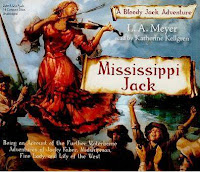 Jack is on the run from the British authorities and ends up in the wilds of America on the river.  After obtaining a keel boat and turning her into a showboat (Jacky cannot resist becoming an entertainer), they obtain a crew and set on down the Mississippi River.  But trouble, as ever always, finds Jacky Faber in the form of some British agents.  Meanwhile, unbeknownst to Jacky,  Jaimy is trying to follow Jacky downriver and running into trouble of his own.

I was excited that Jacky was exploring America more and headed down the Mississippi River to New Orleans.  I loved her adventure down the river, taken in typical Jacky style.  She can't just go down river.  No, she has to have a showboat and a scam.  She is so awesome.  Leave it to Jacky to get a hold of a boat so she can be captain once again.  I liked Jaimy's storyline and liked hearing about his adventures.  I think he is becoming more a man and certainly his trials in American have toughened him up and he is becoming more of Jacky's equal.  That was nice to see.  I worry about him trying to settle her down.  I don't think that is going to happen the way he wants.  Jacky is just too much to contain.

Katherine Kellgren is once again the narrator and once again does an awesome job, especially with the character of Mike Fink, not my favorite character.  I found his voice grating but that just shows Kellgren's talents.  Mike is a hard character and she does a great job capturing his character with her voice.