Under the Jolly Roger: Being an Account of the Further Nautical Adventures of Jacky Faber by L.A. Meyer 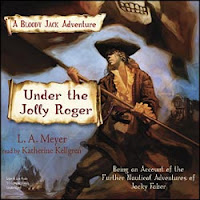 From Goodreads:
After leaving the Lawson Peabody School for Young Girls in Boston--under dire circumstances, of course--Jacky Faber boards a whaling ship bound for London, where she hopes to find her beloved Jaimy. But things don't go as planned, and soon Jacky is off on a wild misadventure at sea. She thwarts the lecherous advances of a crazy captain, rallies sailors to her side, and ultimately gains command of a ship in His Majesty's Royal Navy. But Jacky's adventures don't end there. . .

It's funny that this book feels like two separate adventures because it all comes full circle in the end.  Jacky winds up on the Wolverine, pressed into service after being mistaken for a boy.  Once on ship she reveals herself as a girl but the lecherous captain has ideas about her and keeps her aboard.  Since she is Jacky Faber, she makes herself useful begins training the men.  Later she escapes after a particular incident with the captain and commanders the Emerald for herself, beginning a life of profiteering until her letter of mark is revoked, marking her as a pirate instead.  But Jacky shows herself true and always manages to come out of this situations alright.


I wonder if her relationship with Jamey is going to succeed.  I don't think he has it in him to hold her for long and I cannot see Jacky settling down and being the good wife.  Jamey seems to be alright and he cares for her but I feel like she might outgrow him

15 hours
I'm not sure what more I can say about Katherine Kellgren the narrator of these books.  She is awesome and certainly the voice of Jacky and the rest of her friends.  I love her singing voice and how much emotion she puts into her readings.

Hogwarts: Fight or Flight
Bloody Jack
Whisper in my Ear
Posted by Andrea