In the Belly of the Bloodhound : Being an Account of a Particularly Peculiar Adventure in the Life of Jacky Faber by L.A. Meyer 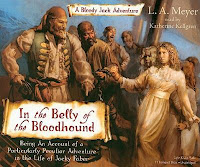 Returning to the Lawson Peabody School for Young Girls in order to avoid piracy charges, Jacky Faber finds herself in another problematic situation.  Most of the girls from the school including Jacky herself are kidnapped by slavers and are trapped in the belly of the slaver's ship.  Jacky must use her cunning to get the girls out of their terrible situation.

Another adventure for Jacky "Mary" Faber!  This one was sadder since it explored what slaves endured on their passages from Africa to the New World.  It was heartbreaking listening to it.  The girls are in a similar situation though they aren't chained up and seem to have more freedom than the black slaves that are usually in the hold.  I guess because they are "well born" and are going to be sold to harems and not as field hands.  I kind of thought that kidnapping well to do young ladies for a social slight on the parent of one of their parents was a shaky reason to kidnap and enslave anyone, but it made for a good story and showed that Jacky is capable of handling any situation.

I think that Jaimey underestimates Jacky too much.  He refers to her often as a silly girl and doesn't seem to realize how clever she really is.  Higgins has more faith in her and isn't surprised in the least when she manages to rescue all the girls while Jaimey really is surprised.  I don't think he is good enough for Jacky and doubt he could keep her tied down.

As always, Katherine Kellgren is the narrator of this book and does a fine job.  She is a good voice actress and I enjoy listening to her.