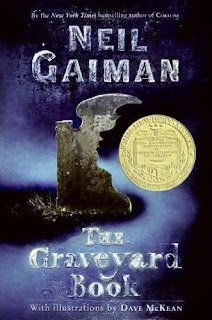 When I was little, I read a lot of Nancy Drew, Babysitter’s Club, Sweet Valley High; when I got older I started with mysteries (Agatha Christie mostly) and more “adult” fare, including to my shame, paperback romances a la Harlequin.

But now I read a lot of YA and Children’s literature and one of my favorites is A Series of Unfortunate Events. It is a dark, highly ironic series of books and I don’t know if I would have liked it. I was rarely interested in the macabre when I was little. The great thing about those books is that they can grow with you. I know I wouldn’t have appreciated it on the same level (which is good because there is a big difference between 10 and 30) but when you are older you can see the subtleties that often you don’t see as a child.

This same thought applies to The Graveyard Book. In the same vein as The Jungle Book, The Graveyard Book, with its wonderfully loose illustrations, is a dark book about a boy whose family is viciously murdered and who is raised in a graveyard by its denizens. It is a book that on one hand, is brutal and, on the other, is just a story about a boy. Nobody Owens is just a toddler when his family is killed. Always curious, he wakes up and escapes his crib without knowing the danger looking for him. When he reaches the graveyard, he is adopted by the Owens couple and is placed up the guardianship of Silas, the not living caretaker of the graveyard. There he grows up and taught by the people of the graveyard and learns many ghostly things.

Neil Gaiman is, of course, the master of these books. Coraline was delightful and eerie and so is The Graveyard Book. This year’s Newbery Award winner, Gaiman invokes a softly creepy feeling where there is danger, very real danger, but where you can feel safe too.