The Murder at the Vicarage by Agatha Christie (audio) 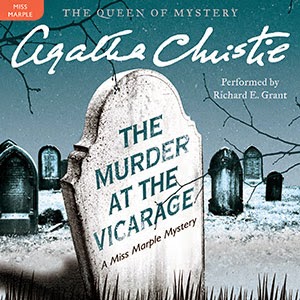 When  Colonel Protheroe is found dead at the vicarage, it causes quite the stir in St. Mary Mead. Even after there are two confessions, the police and the townsfolk are wondering how it happened. But little old Miss Marple is the one who solves the case.

I read a lot of Agatha Christie as a teenager, like a lot. But it's been a while so when SYNC offered up The Murder at the Vicarage I knew I had to give it a listen. And I'm glad I did. I love a good murder mystery especially one that features Miss Marple who is clearly one of the best detectives ever conceived. It's interesting that everyone views her as a nosy old lady even the vicar at the start of the book. But by the end he comes to respect her keen observation powers and skills at deduction. Miss Marple is an example to us all.

I don't remember reading this book though I'm sure I did so I couldn't remember the solution. It was simple yet not at all obvious like most of Christie's mysteries. I didn't remember it being from the vicar's view point but I liked that. He had the most clues and was the most involved so it makes sense. Now I feeling like a mystery kick and will have to grab a few more Agatha Christie mysteries.
Posted by Andrea