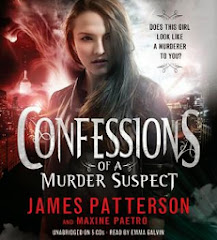 Tandy Angel is a member of the elite Angel family, known for their perfectionism and lack of emotion. Some people call them sociopaths, she just thinks of them as family. When her parents are found dead in their room, the police suspect foul play and everyone including the Angel kids are under suspicion.

Confession: I found Tandy Angel extremely hard to relate to, but then she is almost the exact opposite of me. Her parents have encouraged, beyond encouraged, made her into a emotionless, laser focus practically automaton. So much so I expect the big reveal to be that Tandy and her brothers were created in a lab of some kind. Not quite it turns out, but close (unless that comes up in the next book).  She methodically tries to find out who killed her parents believing she has a better shot than the police and in the midst of her investigation, without her parents' influence, she beings to develop emotions as more and more of the Angel parents' secrets come to light. In the end I still wasn't attached to Tandy or any of her brothers but the story was good and the mystery was interesting (even if the solution was a cop-out).

Highlight for SPOILERS:
The fact that the death of her parents was suicide felt completely like a cop-out though it does fit with how selfish and irresponsible Malcolm and Maude were. They didn't care at all about their kids judging by how they used to them to test out drugs and made them into emotionless robots or try to anyway. And the saddest thing in the whole book was the ending where the Angel children try to convince themselves their parents loved them. The suicides were anti-climatic after learning so much about them and how they handled their personal AND professional lives. Also why would it say in a journal on Tandy that she can read for 6 hours without moving but then the cameras were hidden cameras leading to the neighbors apartment? Malcolm at least would have had to review the footage himself to know what the kids were doing so that couldn't have been a secret. That last part was confusing. It was just a too easy way to show that the parents had committed suicide and to wrap up the book. (end)

Emma Galvin narrates this books and she does a good job of capturing Tandy's emotionless state and then later the one where she starts to gain emotions. I enjoyed her reading. My only issue with the audiobook is that there were sometime long pauses between chapters. It's like they took the CD version and transfer it directly to mp3 without taking out the change of CD pause. The first time it happened I thought my device had failed or something. So that was disconcerting.
Posted by Andrea