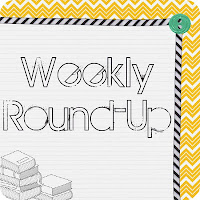 Weekly Round-Up is my wrap-up of last week's activities and includes what I'm reading
this week, reviews I've posted, books in the mail and anything else of interest plus From the Library, my weekly listing of what I've checked out from the library.


This week I'm reading by The Girl who Circumnavigated Fairyland in a Ship of Her Own Making by Catherynne M. Valente and The Honest Toddler: A Child's Guide to Parenting by Bunmi Laaditan and listening to Of Poseidon by Anna Banks, read by Rebecca Gibel .


I gave The Little Bookworm a bit of a face-lift. I'm still tweaking it here and there but I think I like it.

This week on SYNC you can download The Raven Boys by Maggie Stiefvater (a book I highly recommend) and Bless Me, Ultima by Rudolfo Anaya (a book I've never heard of but it sounds good).

The Girl who Circumnavigated Fairyland in a Ship of Her Own Making by Catherynne M. Valente

Twelve-year-old September lives in Omaha, and used to have an ordinary life, until her father went to war and her mother went to work. One day, September is met at her kitchen window by a Green Wind (taking the form of a gentleman in a green jacket), who invites her on an adventure, implying that her help is needed in Fairyland. The new Marquess is unpredictable and fickle, and also not much older than September. Only September can retrieve a talisman the Marquess wants from the enchanted woods, and if she doesn’t . . . then the Marquess will make life impossible for the inhabitants of Fairyland. September is already making new friends, including a book-loving Wyvern and a mysterious boy named Saturday.


The Darkest Mind by Alexandra Bracken

When Ruby woke up on her tenth birthday, something about her had changed. Something alarming enough to make her parents lock her in the garage and call the police. Something that gets her sent to Thurmond, a brutal government “rehabilitation camp.” She might have survived the mysterious disease that’s killed most of America’s children, but she and the others have emerged with something far worse: frightening abilities they cannot control.

Now sixteen, Ruby is one of the dangerous ones.

When the truth comes out, Ruby barely escapes Thurmond with her life. Now she’s on the run, desperate to find the one safe haven left for kids like her—East River. She joins a group of kids who escaped their own camp. Liam, their brave leader, is falling hard for Ruby. But no matter how much she aches for him, Ruby can’t risk getting close. Not after what happened to her parents.

When they arrive at East River, nothing is as it seems, least of all its mysterious leader. But there are other forces at work, people who will stop at nothing to use Ruby in their fight against the government. Ruby will be faced with a terrible choice, one that may mean giving up her only chance at a life worth living.

Rory Miller had one chance to fight back and she took it. Rory survived and the serial killer who attacked her escaped. Now that the infamous Steven Nell is on the loose, Rory must enter the witness protection program. Entering the program alongside her, is her father and sister Darcy. The trio starts a new life and a new beginning leaving their friends and family behind without a goodbye.

Starting over in a new town with only each other is unimaginable for Rory and Darcy. They were inseparable as children but now they can barely stand each other. As the sisters settle in to Juniper Landing, a picturesque vacation island, it seems like their new home may be just the fresh start they need. They fall in with a group of beautiful, carefree teens and spend their days surfing, partying on the beach, and hiking into endless sunsets. Just as they’re starting to feel safe again, one of their new friends goes missing. Is it a coincidence? Or is the nightmare beginning all over again?

If you've never read The Honest Toddler blog then  you are missing out especially if you have or have ever had a toddler. I was pretty excited when the book came out and got it for my birthday.
The Honest Toddler: A Child's Guide to Parenting by Bunmi Laaditan

Bracingly candid, sweetly indignant, and writing with an unchecked sense of entitlement, the Internet’s wildly popular Honest Toddler delivers a guide to the parenting techniques he deems acceptable (keep the cake coming and the apple juice undiluted).

The toddler stage can be a rude awakening for parents, whose sweet infants morph, seemingly overnight, into tyrants ready to turn simple errands into hellish and humiliating experiences. Trying to convince your defiant darling to do something as simple as put on her shoes can feel like going to war. It’s not all blood, sweat, and tears, though. Toddlers can be charming little creatures, with their unfettered enthusiasm, wide grins, and ready hugs. In fact, what makes toddlers so fascinating is their unique blend of cute and demonic behavior. A toddler will take your hand and say "I love you," then slap you in the face.

Now, The Honest Toddler provides an indispensable guide to parenting that places the toddler’s happiness front and center. Who better to instruct parents on the needs of toddlers than a toddler himself?

In a voice that is at once inimitable and universal, The Honest Toddler turns his sharp eye to a wide range of subjects, including play date etiquette, meal preparation, healthy sleep habits, and the pernicious influence of self-appointed experts and so-called doctors. The result is a parenting guide like no other, one that will have moms and dads laughing through tears as they recognize their own child in the ongoing shenanigans of one bravely honest toddler.

Fia was born with flawless instincts. Her first impulse, her gut feeling, is always exactly right. Her sister, Annie, is blind to the world around her—except when her mind is gripped by strange visions of the future.

Trapped in a school that uses girls with extraordinary powers as tools for corporate espionage, Annie and Fia are forced to choose over and over between using their abilities in twisted, unthinkable ways…or risking each other’s lives by refusing to obey.

Email ThisBlogThis!Share to TwitterShare to FacebookShare to Pinterest
Labels: books I bought, From the Library, nook, weekly round-up