Of Poseidon by Anna Banks (The Syrena Legacy #1) (audio) 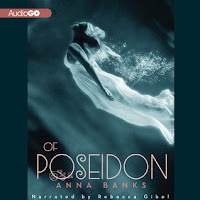 Emma is on vacation in Florida when she literally bumps into one of the hottest guys she's ever seen. Little does she know that Galen is a prince of the Syrena (aka merpeople) who is looking for her. Emma has the ability to communicate with fish, something unusual for both humans and Syrena. This ability might be the key to uniting the two Syrena kingdoms who are engaged in a bloodless war.

If you've ever read a romance novel especially a paranormal romance novel then you will be familiar with the elements to this story. There's the ultimate alpha male and the sweet, spunky, curvy girl who drives him crazy. They fight a lot but there is an undeniable attraction and they have great chemistry when they kiss. That doesn't mean this wasn't a great book. It was really fun and I liked Emma and Galen. It was just very familiar. It really could have been an adult romance if it weren't for the fact that Emma is still in high school. Both of them are legally adults but I guess they are on the fine line between young adult and adult. But don't worry there is no sex and very little kissing (sadly). I loved Emma and Galen but they needed to get their act together.

Still this was super fun and had some great merpeople elements. I feel like the characters were being deliberately obtuse when it came to figuring out who Emma really was but it left room for a "shocking" ending which left the reader hanging. I'm pretty sure no one will really be surprised at the end but I do want to find out what happens next. My only complaint is that I wasn't feeling how Galen's chapters were written. Emma was in first person and Galen was in subjective third person. I'm not really fond of this kind of back and forth.

Rebecca Gibel is the narrator and I liked her. She does a great Jersey accent for some of the minor characters and she really captures the nature of the characters.
9 hours, 32 minutes