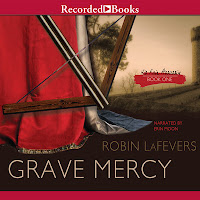 Seventeen-year-old Ismae escapes from the brutality of an arranged marriage into the sanctuary of the convent of St. Mortain, where the sisters still serve the gods of old. Here she learns that the god of Death Himself has blessed her with dangerous gifts—and a violent destiny. If she chooses to stay at the convent, she will be trained as an assassin and serve as a handmaiden to Death. To claim her new life, she must destroy the lives of others.

Ismae’s most important assignment takes her straight into the high court of Brittany—where she finds herself woefully under prepared—not only for the deadly games of intrigue and treason, but for the impossible choices she must make. For how can she deliver Death’s vengeance upon a target who, against her will, has stolen her heart?

I didn't realize this was a historical novel set in 15th century Brittany, a place I didn't know a lot about so I learned something new. Isamae is an interesting character. Very much abusive by her "father" and eventually sold off into marriage by him to what would have been an abusive husband, she is rescued from that situation and brought to the convent of St. Mortain as the saint is her true father. There she learns about all the ways to kill a person and becomes an expert at poisons. Finally she is sent out on her first mission to kill a traitor of Brittany, someone who is marked by Mortain. In the course of her mission, she meets Duval, the bastad son of the former Duke of Brittany though she doesn't realize it at first. Isamae and Duval do not like or trust each other at first and so it's nice to see their relationship grow in an organic manner.

There is a lot of political intrigue and maneuvering in this book as befits this time period. And learning more about court life and assassins is always interesting. While the romance part was nice, it is the court life that makes this book so interesting. And the character growth in Isamae is refreshing.

Erin Moon is the narrator and I enjoyed her reading. Her French pronunciations are excellent and she moved the story along just fine.