This week I'm reading Something Strange and Deadly by Susan Dennard and then finishing The Cuckoo's Calling and listening to The Peculiar by Stefan Bachmann, read by Peter Altschuler. I'm reading Nick and Tesla's High-Voltage Lab  by Bob Pflugfelder and Steve Hockensmith with my son right now. I think I will start featuring the chapter and middle grade books we are reading together.

Last week I reviewed She Stoops to Conquer by Oliver Goldsmith.

Something Strange and Deadly by Susan Dennard

The year is 1876, and there’s something strange and deadly loose in Philadelphia…

Eleanor Fitt has a lot to worry about. Her brother has gone missing, her family has fallen on hard times, and her mother is determined to marry her off to any rich young man who walks by. But this is nothing compared to what she’s just read in the newspaper—

The Dead are rising in Philadelphia.

And then, in a frightening attack, a zombie delivers a letter to Eleanor…from her brother.

Whoever is controlling the Dead army has taken her brother as well. If Eleanor is going to find him, she’ll have to venture into the lab of the notorious Spirit-Hunters, who protect the city from supernatural forces. But as Eleanor spends more time with the Spirit-Hunters, including their maddeningly stubborn yet handsome inventor, Daniel, the situation becomes dire. And now, not only is her reputation on the line, but her very life may hang in the balance.

download from SYNC
The Peculiar by Stefan Bachman (audio) 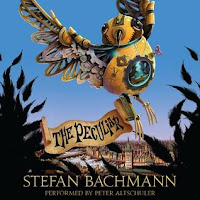 In the faery slums of Bath, Bartholomew Kettle and his sister Hettie live by these words. Bartholomew and Hettie are changelings—Peculiars—and neither faeries nor humans want anything to do with them.

One day a mysterious lady in a plum-colored dress comes gliding down Old Crow Alley. Bartholomew watches her through his window. Who is she? What does she want? And when Bartholomew witnesses the lady whisking away, in a whirling ring of feathers, the boy who lives across the alley—Bartholomew forgets the rules and gets himself noticed.

First he's noticed by the lady in plum herself, then by something darkly magical and mysterious, by Jack Box and the Raggedy Man, by the powerful Mr. Lickerish . . . and by Arthur Jelliby, a young man trying to slip through the world unnoticed, too, and who, against all odds, offers Bartholomew friendship and a way to belong.

Email ThisBlogThis!Share to TwitterShare to FacebookShare to Pinterest
Labels: From the Library, in the email, weekly round-up