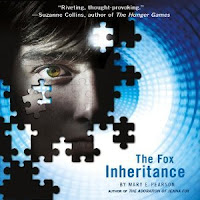 Locke and Kara have been revived after their minds have spend 260 years locked away in a box. The world is a different place now but people like them are still not legal. Gone is everyone they ever knew except Jenna Fox. Escaping from the scientist who bought them back, both on on the run toward Jenna. One is bend on revenge though for being left for so long.

I didn't really feel like The Adoration of Jenna Fox needed a sequel. But when I found out there was one I figured why not? This time focusing on Locke and Kara. At the end of Adoration, Jenna destroys the black cubes that house Kara and Locke to spare them the pain and torture of being in that dark place. So how are they here? Copies. And that makes me wonder how you can multi-copy someone's mind but that issue is never really explored.Instead the big moral issue is what makes a person a person? What makes someone human? There is no real answer but Locke contemplates this for much of the book, almost endlessly.

The bulk of the action revolves first on escaping the doctor and then on finding Jenna and then on dealing with Kara. I use the word action loosely because this is not an action packed book despite the theme of running and hiding. There is never really much danger and then the problem of the bad guy(s) fixes itself fairly neatly. It's like an idea was started but wasn't explored to its fullest potential. I'm a little sorry about that because I think it could have been more. Still it was a decent read and it was nice to see Jenna again and get more about her life than the epilogue at the end of her book. I'm sure she will show up in the next book, Forever Forever, but that is another Locke-centric book so she will still only be a side character.

Some audio book narrators perform their books (Jim Dale, Katharine Kellgren, Tim Curry to name a few) and some just read. Matthew Brown is a reader. He has a nice soothing voice and is very clear, but there is no hurry, nothing to suggest motion or aggression or urgency. So while I enjoyed his voice, I can't say he is the best narrator I've ever heard (see above).