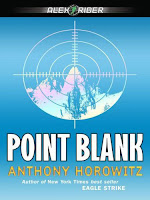 Reluctant teen spy Alex Rider has put himself in a jam. Now endebted to MI6 for rescusing he is once again sent on a mission made for a boy his age.  He is sent to a school for the rich and powerful's troubled sons to find out if there is something sinister going on at the school.

OK. I think the key here is just utter suspension of belief that any of this is in any way rational. I can deal with the teenage spy thing.  Sure sure, this is a thing that can happen. I can deal with the school for troubled wealthy youth. I can deal with the things Alex manages to do before he evens get to the school or the fact that he already seems highly trained and well rounded, something that is attributed to his upbringing by his uncle. But the whole reveal at Point Blanc, the school, is pretty crazy. The whole thing is so James Bond. I honestly at this point don't know if this is criticism or praise. It's a great series and I'll definitely continue on with it but C'MON (SPOILERS highlight) 16 cloned boys who've had plastic surgery and are going to take over the world through their parents and all perpetuated by a crazy mad scientist. I just don't even know. But it's an exciting and action packed series so I'm willing to let these things go for the sake of having something fun to listen to on my way to work.

Simon Prebble is the narrator. I really don't like narrator changes but Simon Prebble is a good narrator and he won me over. It helps that this is only the second in the series and so I haven't associated the previous narrator only with Alex's voice. I wonder if he continues but I can't find the third book on audio so I'll have to read it.

Sequel to Stormbreaker
Posted by Andrea