Harry Potter and the Prisoner of Azkaban (audio) by J.K. Rowling 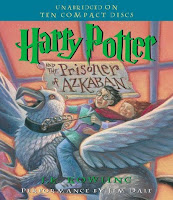 Continuing on with the re-listen, next up was Prisoner of Azkaban, one of my favorite Potter books.  One thing I noticed (again) was how long it took for Lupin and Sirus to get to the point in the shack.  And then I wanted to hit Snape for being so stupid.

What happens to the Dursleys while Harry is away?  Because causing Aunt Marge to expand like a balloon would make them pretty angry and yet they take Harry back.  I know they have to but how does Petunia convince Vernon to do it?  I wonder what goes on it that house.

Also how desperate is Harry for a father figure?  He almost instantly goes from wanting to kill Sirus to wanting to live with him.  I know that he gets a good explanation and is very forgiving etc.  But to want to live with a total stranger so quickly?  I guess with how abusive the Dursleys were/are, Harry just wants someone to love him and take care of him.  That's understandable.