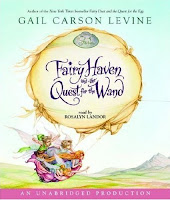 The Neverland fairies are in trouble.  Soop, the mermaid, is sending a flood to Fairy Haven until she gets the wand she was promised.  So Rani, Tinker Bell and Queen, Clarion set off to the palace of the Great Wanded fairies to get one for her.  But wand madness takes over all of them and they can't stop making wishes to their detriment.


Another cute book by Levine about the Disney fairies.  I thought it was precious though there were parts that weren't quite explained enough (the Rani-bat).  It's an age old moral: be careful what you wish for and it applies even to fairies as they make wishes that don't always work out for the best.  I did find this one to be more abrupt than the first one and because I was listening to it I had to stop a few times to make sure I hadn't skip a chapter or something.  But despite that it was a very sweet story.

Rosalyn Landor is the narrator for this story and she does a great job.  Sometimes when a series changes narrators, it throws me off, but I didn't mind this one too much.  I think I liked Hannah Gordon, who narrated the first book, better but Landor has the right soft spoken voice for this series as well.  Both are easy to listen to.
Posted by Andrea