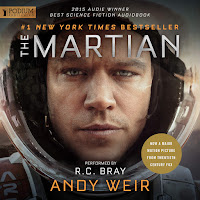 This book is really funny. The narrator does a great job alternating between Mark Watney and the other POVs in this book. I enjoy science fiction but sometimes the science is too much for me but this book didn't have that problem. The science part was very understandable and interesting. The way the author has Mark explain how he is going to do things and how he survives on Mars seems achievable and clever if not impractical. We still haven't seen the movie but I really want to now. This is definitely a book that I'll read or listen to again.
Posted by Andrea