To tell you the truth I'm not entirely sure what I am reading right now. I keep book jumping so who knows. I do know I have A Darkness Strange and Lovely by Susan Dennard started as well as Reached by Allie Condie so it's one of those 2 books. And I am still listening to Rotters by Daniel Kraus (read by Kirby Heyborne) but my car is in the body shop so I switched to The Coldest Girl in Coldtown by Holly Black (read by Christine Lakin) for right now (it's also due back at the library soon so I'm trying to get it done before then). With my son I'm still reading Nick and Tesla's Robot Army Ramage by Bob Pflugfelder and Steve Hockensmith. I know I haven't read review in a while. I'm just not in a reading mood lately which is weird for me but sort of more of the same too.

The Coldest Girl in Coldtown by Holly Black, read by Christine Lakin. 12 hours. 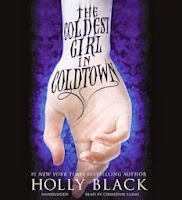 Tana lives in a world where walled cities called Coldtowns exist. In them, quarantined monsters and humans mingle in a decadently bloody mix of predator and prey. The only problem is, once you pass through Coldtown's gates, you can never leave.
One morning, after a perfectly ordinary party, Tana wakes up surrounded by corpses. The only other survivors of this massacre are her exasperatingly endearing ex-boyfriend, infected and on the edge, and a mysterious boy burdened with a terrible secret. Shaken and determined, Tana enters a race against the clock to save the three of them the only way she knows how: by going straight to the wicked, opulent heart of Coldtown itself.

Free from bonds, but not each other

It’s time to choose sides… On the surface, Sorry-in-the-Vale is a sleepy English town. But Kami Glass knows the truth. Sorry-in-the-Vale is full of magic. In the old days, the Lynburn family ruled with fear, terrifying the people into submission in order to kill for blood and power. Now the Lynburns are back, and Rob Lynburn is gathering sorcerers so that the town can return to the old ways.

But Rob and his followers aren’t the only sorcerers in town. A decision must be made: pay the blood sacrifice, or fight. For Kami, this means more than just choosing between good and evil. With her link to Jared Lynburn severed, she’s now free to love anyone she chooses. But who should that be?


The Dream Thieves (The Raven Cycle #2) by Maggie Stiefvater

Now that the ley lines around Cabeswater have been woken, nothing for Ronan, Gansey, Blue, and Adam will be the same.

Meanwhile, some very sinister people are looking for some of the same pieces of the Cabeswater puzzle that Gansey is after...