The Diviners by Libba Bray (audio) 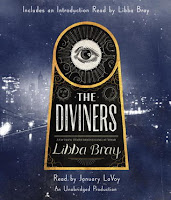 I swear Libba Bray gets better with each book that she writes. The Diviners is a brilliant book. It not only has a mystery written in but it deftly sets up the next book but not in a frustrating way.  There are a lot of elements and characters but the main focus is Evie O'Neill and the Pinnacle Killer. After Evie makes a mistake in her hometown her parents send her to Manhattan to live with her uncle Will, the curator of The Museum of American Folklore, Superstition, and the Occult (AKA "The Museum of the Creepy Crawlies") and his assistant Jericho. There she revels in the New York City life. But when someone is killed in a particularly gruesome fashion and the body left with occult symbols, Will is pulled into the case by the police and Evie cannot help herself and gets involved as well.

It's easy to see the vast amount of research that Bray must have put into this book. From the slang to locale to the speakeasies, she covers one of my favorite historical time periods, the 1920s. And then she adds a creepy murder/ghost story to the mix and everything is jake. I will have the little song the murderer sings as he gets to work haunting me for a long time. That's not a good thing but it shows how expertly these details are woven into the story.

Evie is a brat for a good portion of this book. She is very self-centered and comes off as uncaring about other people's feelings. While it was nice to have a strong female character, one is less of an asshole to everyone else would be nice. But it gives Evie room to grow. I love the romance that develops as it happens naturally but I wonder if a love triangle is planned because while Evie develops feelings for one boy, I developed feelings for another. I'm curious to see how it plays out.

The other characters who are minor in this book are interesting as well. I expect that they will become more major as the series plays out. Memphis Campbell and Theta Knight are my favorites. They both have such sad back stories. I can't wait to find out what happens to them next especially given that so much of their characters haven't been fully explored. There is actually a lot that needs to be explained. But it didn't feel unfinished like so many cliffhangers do. It just feels like there is so much more to learn.

Read by January LaVoy who does a great job voicing all the characters though her Will and Jericho don't deviate too much from each other. And she only seems to have one child voice. But she still does a great job of acting out the story and I liked her reading of it.

"Naughty John, Naughty John, does his work with his apron on. Cuts your throat and takes your bones, sells 'em off for a coupla stones."
Posted by Andrea