I've been listening to some old favorites this holiday season. Instead of doing individual posts of books I've already reviewed I thought I'd put them all here.

The Best Christmas Pageant Ever by Barbara Robinson, read by Elaine Stritch.

The Herdmans are the worst kids in town and somehow they end up mixed up in the Christmas Pageant. Everyone thinks they are going to destroy the pageant but they end up showing everyone the true meaning of Christmas.

I never read this book as a child, but the movie was a favorite growing up.  I discovered that is was based on a book within the last few years and of course I had to read it. It is as delightful as the movie and I hope that it is a favorite for my kids one day.  I like the narration of Elaine Stritch. At first it caught me off guard how much older she sounds than the narrator of the book is supposed to be. But she does such a fine job that it doesn't really matter in the end.


A Christmas Story by Jean Shepherd, read by Dick Cavett 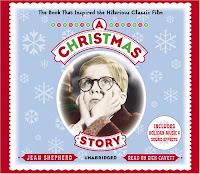 This is one of my favorite Christmas movies is based on a series of short stories by Jean Shepherd (who narrates the movie). Jean Shepherd is one of my favorite retrospective authors and I love his books. And all the stories contained in this compilation should sound familiar to anyone who has seen the movie. From Red Ryder and his bb gun to Grover Dill, the bully all the stories are here. It's fun listening to them and I really like Dick Cavett's voice and the sound effects that go into the audio book.