The Curse of the Blue Tattoo: Being an Account of the Misadventures of Jacky Faber, Midshipman and Fine Lady by L.A. Meyer 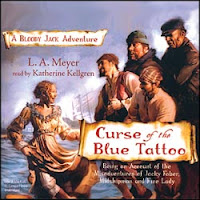 Jacky has been sent to a girls' finishing school in Boston after being discovered aboard the HMS Dolphin posing as a ship's boy.  There she learns that girls are much more vicious and much more subtle about the ways that they fight and Jacky resolves to become a lady and to learn to fight like one too.  But finishing school cannot keep Jacky down for long as she makes her way in Boston.

Oh Jacky!  Always making crazy and rash decisions, getting in trouble and still managing to come out ahead.  Amazing.

Once again Jacky just flies by the seat of her pants and does whatever she wants without thinking the whole thing through.  But she is very clever and she has a knack for making the right kinds of friends so she always gets out alright in the end.  The first book was all about her dealing with boys and men and pretending to be a boy.  This book is all about her dealing with girls and trying to become a lady which is a bit against her nature.  She is much to wild to reign herself in and she refuses to let society do it as well.  I liked the ups and downs of her times in Boston and how she got away with the kinds of things she gets away with.  I'm totally ready for her next adventure.

As usual,  Katherine Kellgren does an excellent job with the narrator.  She really adds a lot of feeling to the story, bringing the story to life.  Jacky can be a frustrating character since she does a lot of unthinking things and Kellgren captures Jacky highs and lows.  She also does a great job with the other characters, varying them each to add differences to their voices.  And I love her singing parts.  My only complaint, and this is because I am from Louisiana, was her New Orleans accent.  It was much too east coast Southern and not quite French enough.  New Orleanians have a harder, almost New York sounding accent.  It is a hard accent to grasp if you are not around here (kinda of like a Cajun accent but that is a separate topic).